Written by Ellery Gibbs
Updated over a week ago

Arguably, the Suggested Vehicles campaign type is the most important campaign to understand as all shoppers qualified to get Foureyes emails are sent Suggested Vehicle emails. This is your workhorse campaign, the meat and potatoes that keeps your dealership and your inventory top of mind. Here’s why.

The suggested vehicles campaign takes the personal preferences shoppers have exhibited (let’s say four-door trucks under $34,000) and shows inventory that matches that search. Inventory featured in the suggest vehicles campaign could be: 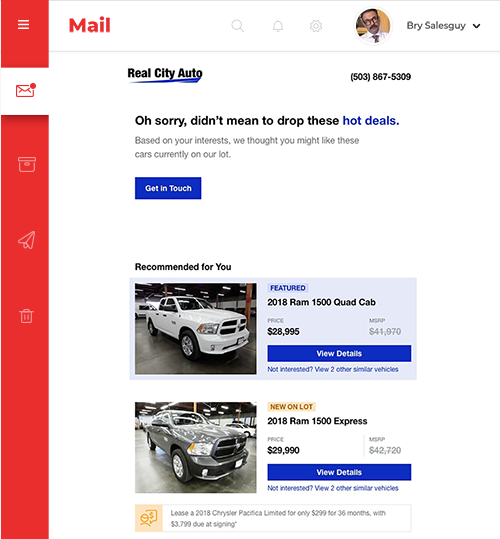 Unlike some of the other campaign types, the Suggested Vehicles campaign requires no action from your dealership to trigger an email. What that means is once someone meets the qualifications to receive Foureyes emails, they will start receiving Suggested Vehicle emails within 24 hours.

If that shopper comes back to your website and shop again, great. The Vehicle of Interest Algorithm gets smarter about it’s recommendations. If the shopper is opening and clicking in the emails, great. Foureyes will increase the cadence, modifying the subject lines and vehicle recommendations slightly to keep interest piqued.

If shoppers aren’t opening the emails, Foureyes still sends x1 Suggested Vehicle email a week. Your shoppers can opt out any time they’d like, but we’ve seen that consistent and relevant content moves browsers to become buyers—even if they stop opening emails for a few weeks.

Did this answer your question?