Using the Weekly Report to Monitor Your Funnel

Review Recovered Leads Safety Net Added to Your CRM!
F
Written by Foureyes
Updated over a week ago

In this video, we'll cover the Safety Net Weekly Report. We'll talk about what it is and how to use it to monitor your funnel.

More of a reader? Jump to the section below.

Continue to the next video in the playlist to dig deeper into process trends.

What is the Safety Net Weekly Report?

The Weekly Report comes to your email inbox on Friday mornings, with a quick update on the prospects Foureyes has recovered so far this month.

How do I use this report to monitor my funnel?

At the top of the report, you’ll find two key stats:

These headlines will let you know if there’s anything newsworthy below. Most weeks, you won’t even need to scroll further.

If you do notice a spike in either stat, don’t panic - Foureyes kept these opportunities in your funnel. Plus, if you've experienced higher lead volume this month, it’s normal for the volume of recovered prospects and missed calls to rise proportionally.

To dig deeper into a spike, keep scrolling to see what % of your qualified prospects were missing from your CRM before Foureyes added them.

This is your Recovered Rate, and it'll tell you at a glance whether there's a major leak in your funnel.

On average, Foureyes recovers 15% of qualified prospects, but every store experiences its own peaks and dips. Keep an eye out for major increases that are out of line with your dealership’s typical Recovered Rate.

Notice an uptick in your Recovered Rate? Scroll on to view recovered prospects broken down by lead action type (calls, forms, or chats). 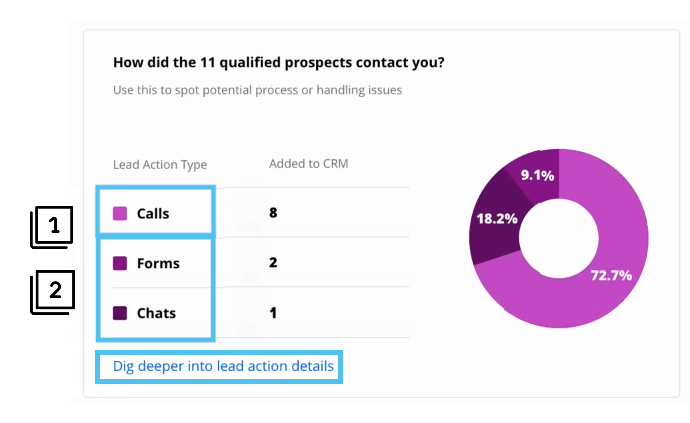 1) Calls - An uptick in recovered calls means that more calls than usual aren't getting logged in the CRM by your team. This could indicate a personnel or process breakdown.

Think you may be spotting a trend? Click 'Dig deeper into lead action details' to review the individual recovered prospects in the Safety Net dashboard and dig into the root cause.

At the bottom of the report, take a closer look at calls missed so far this month. 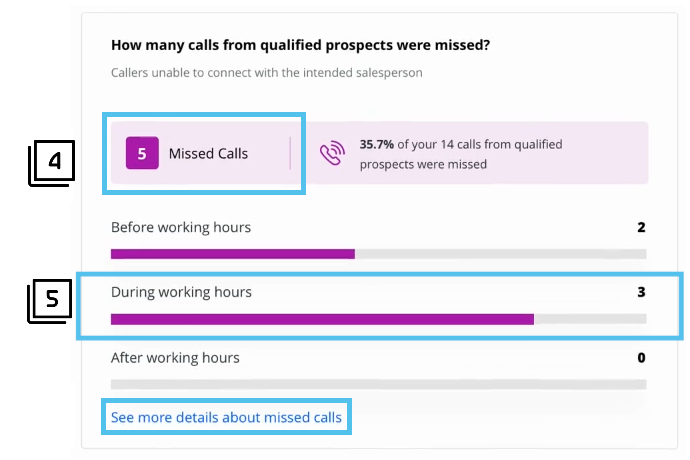 4) Missed Calls - these are calls placed by qualified prospects who didn’t reach their intended salesperson.

Foureyes notified your team that the call was missed in real time, but you can monitor trends on a weekly basis in this report.

5) Calls Missed During Working Hours - these are calls missed when customers should be able to reach your team.

Busy teams can't always answer the phone, but a large number of missed calls during working hours could be a sign that they need support, or that you've got a process breakdown.

Seeing a spike? Click 'See more details about missed calls' to pinpoint when they happened and diagnose the why in the Safety Net dashboard.

Next: Spot Trends
Did this answer your question?